WHAT IS BACK PRESSURE?

Every activity that involves one surface moving against another will usually create friction. Friction is a force that tends to limit motion by seemingly holding back the surfaces from sliding smoothly across each other. One would think the flow of fluids through a pipe would be effortless and without restriction. However, there is always a resistant pressure against the forward motion or flow of fluids through a pipe system. This is known as backpressure. 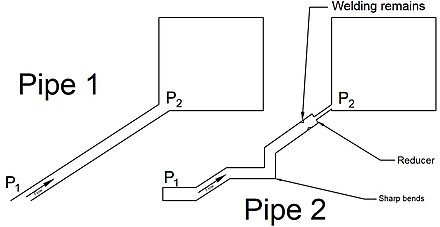 CAUSES OF BACK PRESSURE

One of the causes of backpressure within a system is fluid friction. As with motion activity where friction plays a role, the sliding of the fluid along the surface of the pipe creates some friction that tends to resist the forward movement of the fluid. This negative force must be overcome at each point along that pipe before the fluid can literally “surge forward”.

Liquids tend to experience this friction leading to back pressure more than gases. Gas molecules easily slide across surfaces without clinging to them, unlike liquids.

Backpressure could also occur as a result of induced resistance to flow such as bends, valves, any narrowing of the pipe’s diameter e.g. crimps, obstructions, or a combination of these factors and others.

Interestingly, back pressure is necessary for certain situations. Sometimes, it is desirable to create sources of back pressure e.g. bends and crimps, at strategic points within the well completions to serve as pressure checks. This strategy is helpful in preventing sudden pressure surges during production. This ensures the safety of operations and protection of sensitive components that could otherwise be damaged.

Completed wells (wells made ready for production after drilling operations) usually produce enough pressure to sustain the fluid injection process. However, in depleted wells, back pressure can become a challenge. Depleted wells with very low reservoir pressure may not flow at all. The pressure is not sufficient to overcome the backpressure created in the system. In such situations, it becomes necessary that additional pressure must be provided using pumps located along the pipe system.

Between any two points A and B along the pipe, the pressure of the fluid at point A decreases by the time it gets to point B because some of it has been used up in overcoming the backpressure experienced by the fluid while covering the distance between the two points.  Each time this resistance to forwarding flow is overcome, pressure drops, much like an athlete running a hurdle race loses some stamina with each jump. Pressure drop is the decrease in pressure between any two points along the pipe.

In conclusion, back pressure is a force along the flow of a liquid that negates its forward movement giving rise to a decrease in pressure between two points along the pipe. Additional force must be applied in the same direction of the fluid in order to overcome it.